"The Sled Dog in Three Sizes" 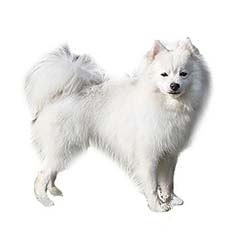 The American Eskimo Dog's beginnings can be traced to the several varieties of spitz developed in Europe. While most of his ancestors were Germanic spitz breeds, he also was influenced by the Keeshond, Pomeranian, and Volpino Italiano. In some ways, the Eskie grew out of dogs excluded from some of these other breeds. These included Pomeranians weighing more than 8 pounds and white Keeshonden, both of which became unacceptable when their breed standards were modified. That only made a difference to show-dog owners, and there were plenty of white, medium-sized spitz dogs that came with their owners to America, where they became general farm workers and watchdogs. By the 1920s they were known as the American Spitz. At that time they became well-known as circus performers. The traveling circus usually had some puppies for sale, complete with pedigrees that detailed the tricks each ancestor knew. Most of today's American Eskimo Dogs can trace their ancestry back to those circus canines. After World War I, the Germanic-sounding “spitz” was removed from the breed name, and the dog was renamed the American Eskimo. Although the UKC recognized the Eskie in 1913, the AKC only recognized him in 1994. In 2006, the American Eskimo Dog ranked 109th among the 155 breeds registered by the AKC.

Like all spitz breeds, American Eskimo Dogs have an independent and energetic nature. However, their strong history as companions and circus dogs has tempered that independence with a dose of obedience. Their watchdog background endowed them with a wariness of strangers, and at one time the breed had a reputation for snippiness. Better-bred and well-socialized Eskies may still be aloof, but have lost the snippy attitude. Eskies tend to be fairly enthusiastic barkers – it's that watchdog thing again.

The American Eskimo Dog's white (or white with cream) coat is made up of a thick undercoat and long, coarse guard hairs, as is typical of northern spitz breeds. The face is wedge-shaped, the ears small and pricked, the body compact. The tail, which is carried on the back, is bushy. Eyes, nose, and lips are black.

An American Eskimo Dog is at his best when given challenging things to learn, especially tricks. He's stubborn enough that if you pull one way, he'll pull the other - unless you make it worth his while with reward-based training. Given positive training methods, he can perform astounding feats of intelligence.

American Eskimo Dogs shed their coat twice a year, during which time your home looks like an indoor blizzard unless you brush daily. During the rest of the year, weekly brushing is required.

The American Eskimo Dog has no overwhelming health concerns. However, hip dysplasia (mostly in larger dogs), progressive retinal atrophy, and patellar luxation (mostly in toys) are seen in the breed. Any dogs intended for breeding should receive OFA and CERF screenings first.