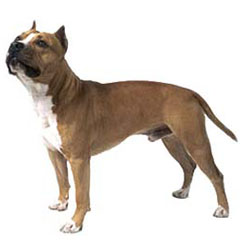 A well-bred, well-socialized American Staffordshire Terrier is friendly, devoted, tenacious and courageous. Aggressiveness, possessiveness and/or territorial behavior should not be present. Unfortunately, the continued misuse of these dogs for fighting activities has led some to be aggressive to other dogs. Extreme care should be taken when exposing any American Staffordshire Terrier to a dog park, group obedience class, or other situation in which dogs gather in groups. Careful breeding and socialization are essential to ensuring that any puppy retains the breed's true temperament. Not surprisingly for a dog with such powerful jaws, the American Staffordshire Terrier deserves his reputation for being a notorious chewer. Bypass flimsy, squeaky toys in favor of sturdier fare that can stand up to this dog's oral abuse. Daily exercise will also help to curb chewing.

Consistent, positive training is crucial to bringing out the best in this breed. Socialization from puppyhood is essential to helping the dog become accustomed to all of the sights, sounds and situations he's likely to encounter in his life with the human community.

Grooming this dog is a snap: a weekly brushing, pedicure and ear cleaning, and he's good to go.

Like all purebred dogs, the American Staffordshire Terrier suffers from some inherited diseases. Among the most common are hip dysplasia, cataracts and hypothyroidism. Dogs intended for breeding should receive OFA and CERF clearances before being bred. Prospective buyers should ask to see these clearances before buying a puppy.

Lucenay's Peter, who portrayed Pete the Pup, the Little Rascals' mascot in the "Our Gang"comedies of the 1930s.